The coach didn’t hear about it on a leadership course, or from another coach. He read about it in a book by Jon Gordon, a self-styled American leadership guru.

Titans coach Mike Mularkey had given the players homework — in addition to studying the playbook — suggesting they read a motivational text titled “The Energy Bus: 10 Rules to Fuel Your Life, Work, and Team with Positive Energy.”

Pelissero: The time we heard about the Juice Brothers in Panthers locker room

..."GET ON THE ENERGY BUS. That’s what we’re about, is positive energy,” Coleman said. “It’s electric. There’s a book. We all read the book. It’s called the Energy Bus.”

The Jets’ Resident Bookworm Has Some Advice—for Himself

I'm actually reading a book right now called the "No Complaining Rule" by Jon Gordon. That's always been my approach—never to complain about it and just embrace it." - Brandon Marshall

The book is one of several that Fisher, the Knicks’ second-year coach, has handed out to some of his players as a kind of summer reading list.

How Paul Goldschmidt turned himself into a perennial MVP candidate

He has also become an avid reader. His tastes run toward tomes that concern leadership and overcoming adversity, such as Jon Gordon's The Carpenter ...

"That book really helped me, especially during training camp because it got a little hard but perception is everything," Tennessee defensive end Corey Vereen said.

5 Ways to Rekindle Your Optimism After You Crash and Burn

The life of an entrepreneur is filled with setbacks. We have a great idea (well, what we thought was a great one, anyway) that just doesn’t take off. We screw up and lose a client. We don’t screw up and still lose a client. We run out of money. A valued employee leaves. That’s just the way it goes when you choose this life.

Even with ‘camp body,’ corner Alvin Hill standing out for Terps

Jon Gordon visited the team last week and spoke about contributing “your one percent,” Hill said Monday. The visit left an impression on the junior corner, who later wrote down that he would contribute one percent more to each of his teammates than before.

The Energy Bus finds out its next destination on Thursday.

That’s when the Bellevue Bruin softball team will find out where it will play its NAIA National Tournament Opening Round games.

Shelton Gets On ‘The Energy Bus’

When Washington coach Chris Petersen asked his players to read “The Energy Bus,” Danny Shelton wasn’t quite sure what to think of the assignment.After three successful seasons, the defensive lineman thought he had things figured out, at least when it came to football.The more he read, though, the more he realized what he could accomplish if he added the right energy to his combination of size and strength. “I loved the book,” Shelton said.

Jon Gordon, author of the bestselling book “The Energy Bus,” visited with the team a few weeks ago, passing along a message of positivity and prompting the word selection.

Want to complain? You can’t work at Align Networks

Management at Align Networks has built an attractive internal culture based largely on one rule: No complaining. More specifically, employees are not allowed to complain unless they can come up with a solution for the issue they’re complaining about. The rule goes hand-in-hand with...

“That’s the way to start a new semester,” Stanton said after listening to Jon Gordon speak for an hour and then answer questions from a crowd that represented all 24 Husker varsity sports. “I thought Mr. Gordon’s speech got everyone’s mind on the right track. It inspired me getting ready to go into such an important spring,” Stanton said. “It really gave me some good thoughts to focus in on.”

Santa Clara head coach Kerry Keating is building the Broncos into a contender, one word at a time

It’s part of the message from the book Energy Bus, by Jon Gordon, which counts the likes of coaches Mark Richt (Georgia football) and Doc Rivers (Boston Celtics) as believers. The Broncos have joined the club...

Do the world and yourself some good, stay positive

The teachers and staff at Hudson Maxim School have seen positive changes in the school environment after implementing this year's character education theme "Life is Good." The theme, based on the best-selling book "The Energy Bus For Kids" by Jon Gordon has...

Boyd says he made an attitude adjustment after hearing Jon Gordon, a nationally known expert on the power of positive thinking, speak to the Clemson team this summer. It led Boyd to read Gordon’s book “Energy Bus: Ten Rules to Fuel Your Life, Work and Team with Positive Energy.”

The economy has been bad for a while. People and businesses are struggling. Yet there are many people and businesses that are rising above that with a mentality of optimism. I’m one of them. You can be too Jon Gordon, author of the Wall Street Journal bestseller, The Energy Bus has a new book about the power of faith and positivity in one’s life and...

Everyone is on the bus — the energy bus, that is.

New Irish coach Christine Halfpenny has not only changed the philosophy of the program already this season, but also has altered the team's reading list, requiring every player to read The Energy Bus. The book, written by Jon Gordon, was assigned over winter break and preaches positive energy in a team environment.

“No negativity allowed” signs hang throughout Principal Lisa Sigmon’s office at Bostian Elementary. And teachers at the school wear “no excuses” pins.

The school’s staff is...

Crashing the Myth of Work/Life Balance

Most of us live our lives like we’re on a tightrope, teetering between giving our all at work, giving our all to family, getting just enough sleep, and then doing it again the next day. We call it...

TimesUnion.com: Jon Gordon is all about being optimistic and having a vision. That's probably what made Gordon, a best-selling author, speaker and... 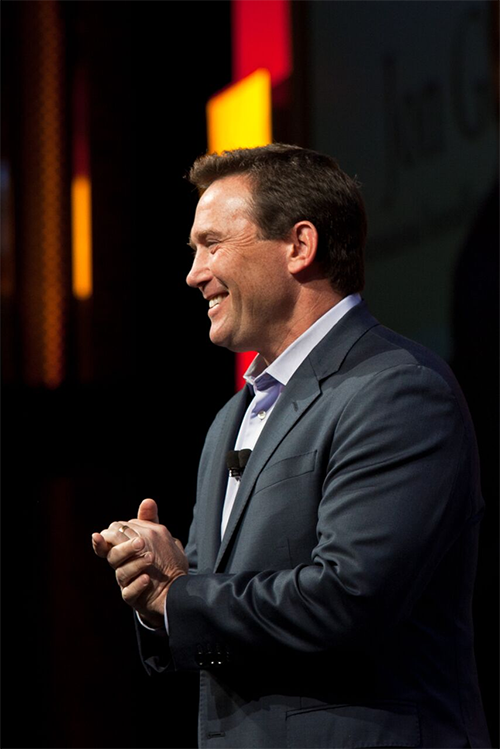